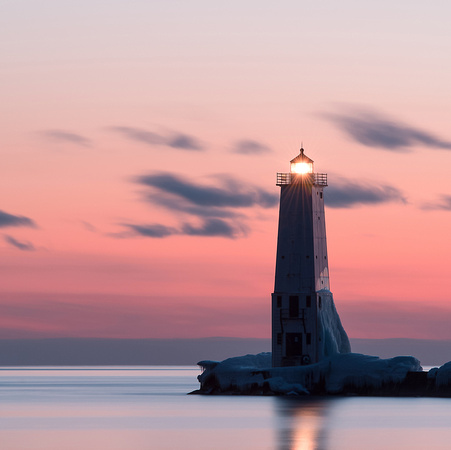 This image of the Frankfort lighthouse came about when I was on an equipment test. A week or so before this was taken I was on the lookout for a new lens, specifically, a 70-200 mm. I had my eye on the f\2.8 version of this lens but after a recommendation by John McCormick I decided to give the f\4 version a try. About half the price and half the weight I was hoping it wouldn't be half the quality as well! I was pretty sure it wouldn't be, John knows his way around a camera pretty well as fans of Michigan Nut Photography already know so I was pretty confident he was more likely than not spot on here.

I also needed some filters. The 70-200 is a much easier lens to put a filter in front of than, say, the 14-24 mm or any other ultra wide angle lens for that matter as the front end is threaded and there are plenty of commercially available options for filter holders. I prefer the filter holders that take a flat filter as opposed to the filters that screw onto the lens threads directly as they allow for more flexibility, especially in the case of neutral density filters. For initial testing I went with a Cokin filter system and a Formatt Hitech square filter.
I figured the beach at Frankfort would be a great place to test this setup as it would allow me to put the zoom through its paces and, further, see if the hype surrounding this lens and it's alleged sharpness is fact or fiction.
It was within a week of the first day of spring but around here, more often than not, that simply means it's within a month or two of not being winter anymore and on this particular day spring was nowhere to be found. Temperatures were in the 20's and with the wind tossed in the last thing on my mind was spring. But I wasn't here to check the weather, I was here to get some photographs.
Taken shortly after the sun had set, I programmed the timer and did my best to capture the beautiful reddish\pink that I was seeing with my eyes and, for the most part, I think I was able to capture it. I took a few more images before darkness settled in and made my way back to headquarters.
During post production, I was impressed with the lens to say the least. I think what surprised me the most about it was the sharpness--the alleged nature of that characteristic was no longer alleged, this thing was sharp! Part of my workflow includes a sharpening step to tidy up what is missing in the RAW image but this particular image--and the others taken with it--didn't require much of a push to get the level of detail that I like.
Simmerman Photography
Powered by ZENFOLIO User Agreement
Cancel
Continue